Gluten-free Diet: Is It for You? 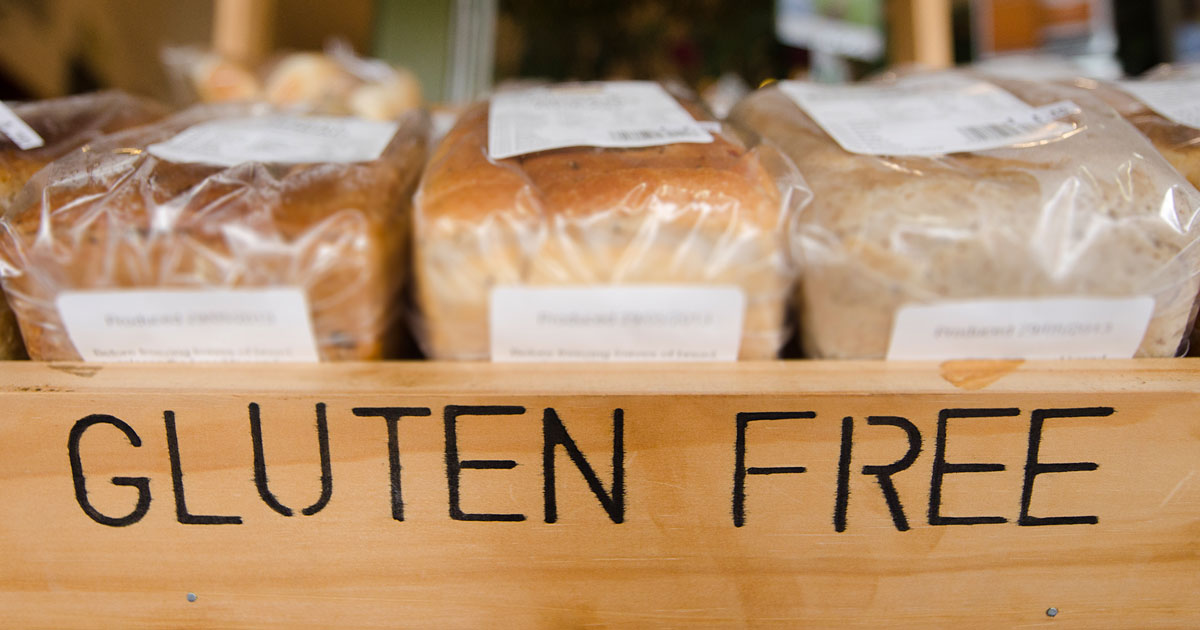 Approximately 30% of all Americans now, either avoid gluten-containing foods or eliminate gluten all together. The popular paleo diet avoids gluten-containing grains and claims that our distant ancestors did not eat them. Even some PBS TV health specials and popular health books advocate such. Are they going too far? Let’s examine the evidence.

What is gluten? Gluten is a protein found in wheat, rye, barley, and triticale (a cross between wheat and rye.) More specifically, gluten is basically two proteins, gliadin and glutelin, bound together by starch. In nature, gliadin is found predominantly in the seeds of various grains. A group of proteins known as gluten makes up about 75 percent of all the protein in wheat.1

For people with this disease, ingesting gluten causes the immune system to make autoantibodies that attack the villi, tiny finger-like projections that line the small intestine. This is serious because villi are involved in the absorption of almost all nutrients: glucose and other sugars, amino acids, fatty acids, minerals and vitamins. Inflammation also contributes to this destructive process. Whenever people with celiac disease eat gluten, there are also insufficient enzymes to digest the food, so the left over peptides from digestion trigger inflammation. This inflammation is further amplified by an enzyme called tissue transglutaminase.2

Malabsorption resulting from damage to the absorptive lining of the small intestine can have wide ranging consequences: weight loss, osteoporosis, neuropathy, and so forth.3

We should note that gluten might not be the only culprit in a number of cases of celiac disease! One study revealed that individuals who had both celiac disease and dermatitis herpetiformis (a rash associated with celiac disease) had an immune reaction to five groups of non-gluten proteins.4

How is Celiac Disease Diagnosed?

It appears to be the result of genetic and environmental factors. Individuals with celiac disease cannot tolerate one bite of gluten! The development of tissue transglutaminase (tTG) autoantibodies alerts one to the possibility of a celiac diagnosis. Two more tests, anti-endomysial antibody (EMA), and deamidatedgliadin peptide (DGP), are also used to diagnose celiac disease. However, since it is possible to have positive results to these blood tests and not have celiac disease and conversely, to have celiac disease but not have positive blood tests, an endoscopy and intestinal biopsy might be needed to confirm the diagnosis and rule out other diseases.5

How Common is Gluten Sensitivity?

Even though the overall clinical signs of gluten sensitivity are less severe than in celiac, it still poses significant health threats. In some studies of neurological diseases of unknown origin, a majority of patients show signs of gluten sensitivity.7 Gluten-sensitivity disorders may alter serotonin functioning in the brain, thus lowering the threshold for depression. In such cases, eliminating gluten remedies the depression (as long as other factors are not involved).8

Researchers from Sweden and South Africa have compiled the first global estimates of celiac disease and associated mortality. These estimates suggest that around 42,000 children may die every year from celiac disease, mostly from Africa and Asia.10) Celiac disease increases the risk for osteoporosis, intestinal cancer, joint and bone conditions, brain fog, cancer of the intestines, non-Hodgkin’s lymphoma, and other autoimmune diseases. Because the health of all the body’s cells, tissues, and organs depend upon adequate nutrition, celiac disease is quite serious indeed.

Untreated celiac disease carries an added risk for a wide variety of additional autoimmune diseases.11 The autoantibodies that are produced by people with active celiac disease can attack other parts of the body possibly also contributing to nerve and brain dysfunction, thyroid disease, and adverse pregnancy outcomes. Celiac disease also increases the risk for thyroid problems and kidney failure.

The most classical symptoms of gluten sensitivity may be different for each individual, but they mostly include diarrhea and abdominal pain, irritability or depression. Classical digestive symptoms predominate in infants and children.12

Delayed growth and puberty, defects in tooth enamel, and irritability are commonly seen in children with celiac disease.

For adults classic gastrointestinal symptoms of diarrhea, constipation, bloating, nausea, and discomfort could indicate gluten-related disorders. In adults most of the signs and symptoms for gluten sensitivity and celiac disease occur outside the digestive tract.13

A 14 year study with 770 celiac patients revealed that 2/3 of them did not have the classical signs and symptoms. In this particular study, some of the most common symptoms were bloating, canker sores, IBS (irritable bowel syndrome), constipation, and acid reflux. Other symptoms, outside the digestive system, were even more common and included osteoporosis, liver disease, recurring miscarriages, hypothyroidism and autoimmune conditions.14

Please keep in mind that these symptoms could be indicative of other more common problems.  So don’t self-diagnose, but see your doctor and get the appropriate lab work.

Besides genetics, other autoimmune disease may increase the risk for celiac disease.15

It should be noted that people who have celiac disease also are at greater risk for other autoimmune conditions such as:16

Celiac disease is four times as common as it was 60 years ago. The most likely suspects include genetics, other auto-immune conditions, plant genetic modifications, gluten as food additive, overuse of gluten-containing grains, modified starch, the way gluten products are processed, and environmental toxins. In certain genetically-modified grains, the gluten strength has been increased which can improve the shape of a product as it is being baked. Intestinal infections, such as gastroenteritis and giardiasis, can trigger celiac disease. Deficiency in digestive enzymes or food allergies may also play a part.18 As much as possible, it is better to eat organically grown cereals.

Herbicides are also implicated. For example, glyphosate, the active ingredient in the herbicide, Roundup®, is problematic. Fish exposed to glyphosate develop digestive problems that are reminiscent of celiac disease.19 Celiac disease is associated with reduced production of friendly bacteria and overgrowth of harmful bacteria. Glyphosate also imbalances the components of gut bacteria so as to favor disease-producing germs instead of friendly, beneficial bacteria. Additionally, glyphosates decrease digestive enzymes.

For these reasons, the authors of this article think the following practices are advisable if one wants to lower their risk for gluten-sensitivity:

Unless you have celiac disease or gluten intolerance, gluten is not a poison and you can eat it safely but in moderation.

What can Help Gluten Sensitivity and Celiac Disease?

The cardinal principle in treating celiac disease or gluten sensitivity is to avoid gluten.
Here are some suggested guidelines from the ADA regarding celiac disease but they do not substitute for reading labels!20

Remember, too, that product labels need to be read carefully as various components of the wheat berry can appear in other products such as medicines, vitamins and supplements, lip balm, and even the glue on stamps and envelopes.21 Some medications may contain gluten. So ask your pharmacist if you have celiac disease if any of your prescribed medicines contain gluten.

What else helps gluten sensitivity? Other adjunct treatments for gluten sensitivity may include: minimizing food allergens, adopting a plant-based anti-inflammatory diet, improving gut health by taking probiotics and healthful lifestyle, utilizing digestive enzymes if enzymes are truly deficient, and taking omega-3 fatty acids.22 Using probiotics and/or prebiotics (found in some foods) may help alleviate the severity of symptoms in celiac disease.23

Eating Gluten-Free: a Fad or Something Healthful?

Autism spectrum disorders (ASD) have been associated with gluten intolerance in a number of studies.25 This is not saying that gluten sensitivity actually causes autism, but in some cases it may be a contributing factor or may increase its risk. A few studies suggest that a gluten-free diet may benefit some individuals with autism.26

Downsides of a Gluten-Free Diet

The gluten-free diet also may increase the risks for nutritional deficiencies, especially in B vitamins, iron, and trace minerals. Gluten-free processed grain products (e.g., breads, cereals, and crackers) are often lower in fiber, iron, zinc, and potassium.27 Individuals should not experiment with the gluten-free diet without proper testing to rule out celiac disease. For those who have celiac disease or a gluten-sensitivity, a consult with a dietician would be judicious and be periodically checked for deficiencies in iron, calcium, and vitamin D.

So, before giving up vitally important whole grain products consider your entire lifestyle and don’t just go with the gluten-free movement out there because you could be on the losing end. Instead, make an effort to use grains in as natural, simple, yet tasty a manner as possible. Rotate between gluten and gluten-free grains. Your energy will pick up and your mind will be sharp. But, for those that are truly unable to eat gluten without harm there are other good choices such as quinoa, millet, and brown rice.

Unlike their conventional counterparts, most refined gluten-free foods are not enriched or fortified with essential vitamins and minerals. The manufacturers of gluten-free products want to make a dollar so they emphasize what they think are the benefits. Never be pulled into making a major lifestyle change without first doing the research. Examine your own health, and the health of your children, and determine if going gluten-free is really the best choice for you and your family.