Optimism: Is It Really Beneficial to Your Health? 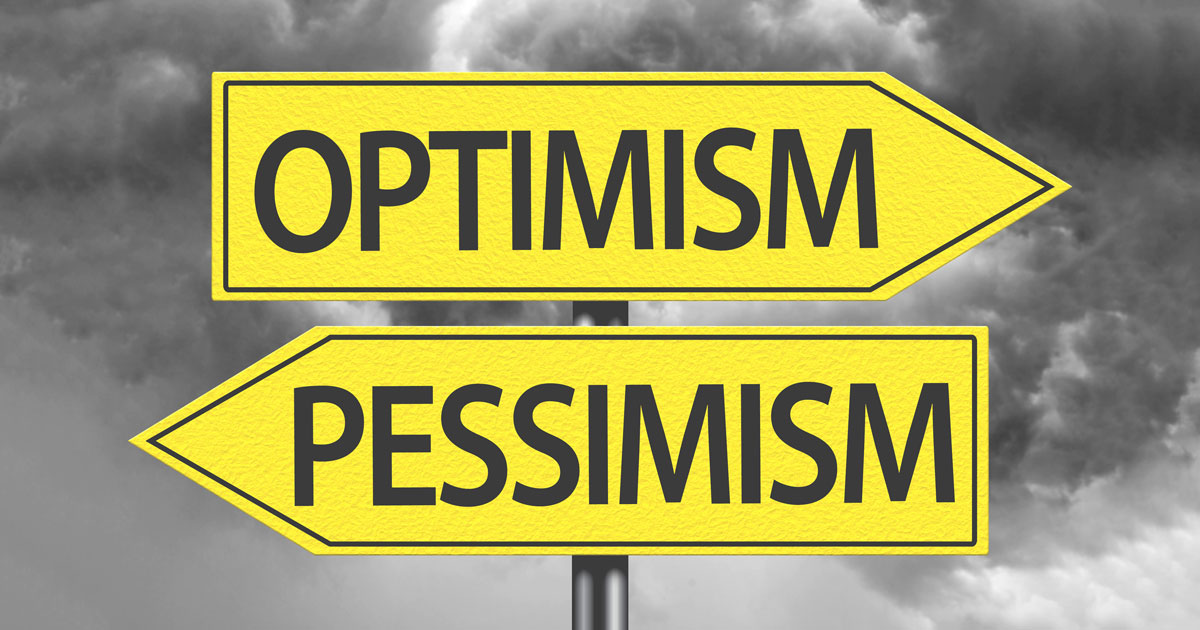 How can optimism improve our health? Is all optimism helpful? How can you build optimism when so many of your hopes have been decimated? What is better than optimism?

Dispositional optimism is the personality trait that believes in positive outcomes and good things will happen in the future. When you see a glass half filled with water, do you think “half full” or “half empty”? Or, “My glass is half full, but I’ll drink it in the next ten minutes and then refill it.” When you are overlooked for a long-desired promotion, do you submit to thinking, “I’ll never make it,” or do you see the brighter perspective: more time to spend with your family and opportunities to develop other interests?

Winston Churchill observed that “a pessimist sees the difficulty in every opportunity; an optimist sees the opportunity in every difficulty.”  In contrast to pessimists, optimists believe troubles are transitory, limited, and manageable. Pessimists see trouble and problems as always being inevitable, ever present, and pervasive.

Optimism leads to a hardiness that prolongs health. The Universities of Helsinki and Turku along with the University College of London did a large observational study assessing the protective effects of an optimistic outlook on health. They found that individuals who scored high on optimism questionnaires reported fewer sick days after a major life event (severe illness or death of a spouse or family member) and recovered more quickly than those who scored low on optimism. In other words, optimism can assist in coping with major, negative life events more successfully.1

A Dutch study consisting of 900 individuals, ages 65-85, showed that those who reported high levels of optimism had 55% less risk of dying from all causes and 23% less risk of cardiovascular death than those who reported high levels of pessimism–even after adjusting for age, sex, chronic disease, education, smoking, alcohol consumption, history of cardiovascular disease or hypertension, body mass index, and total cholesterol level.2 Another study showed that a high level of dispositional optimism was associated with healthier lifestyle practices such as more physical activity, nonsmoking, consumption of fruit, vegetables, and whole-grain bread. The results in this study were independent from age, education, living arrangement, self-rated health, cardiovascular disease, diabetes mellitus, cancer, and body mass index, as well as total energy intake.3

Individuals with the highest levels of optimism have twice the odds of being in ideal cardiovascular health compared to their more pessimistic counterparts. Optimists had significantly better blood sugar and total cholesterol levels than their counterparts. They also were more physically active, had healthier body mass indexes, and were less likely to smoke than pessimists.4

Another study found that dispositional optimism protects against the development of depressive symptoms during 15 years of follow-up in elderly, community-dwelling men.5 Clinical depression substantially increases the risk of heart disease and clots. Researchers at the University of Pittsburgh sought to ascertain the effect that optimism or pessimism had on the development of arteriosclerosis in the carotid arteries of middle-aged women. They performed carotid scans on 209 premenopausal women. Then, when the women were at least five years postmenopausal, the researchers obtained a second scan of each woman. The results showed that the optimistic women had significantly less progression of atherosclerosis than the pessimistic women.6

It has been proven quite clearly that whether one is young, middle aged, or older, optimism improves health, whereas pessimism weakens it. Pessimism also reduces the efficiency of the immune system. Conversely, optimism improves the ability of natural killer cells to destroy viruses, cancer cells, and other suppressors of the immune system.7 In women who have breast cancer, optimism with social support helps to modulate some of the immune-suppressing effects from stress.8 Furthermore, researchers at the University of California discovered that an optimistic perspective buffers the negative effects of stress on the immune system in individuals without cancer.9

As previously mentioned, optimists seem to engage in healthier habits when compared to pessimists. A Finnish study involving 31-year-old individuals showed that men and women who scored in the highest quartile for optimism ate salads, vegetables, berries, and fruits more often than those who were in the lowest quartile. Pessimistic thinkers also ate less fiber and consumed more alcohol.10 In a study of care givers, a high level of pessimism signaled an increased risk for poor health.11 Other studies have revealed that optimistic individuals reported a higher quality of life, engaged in more active coping, and adopted more health-promoting behaviors than individuals who scored low in optimism or were pessimistic.

Researchers have found that optimism helps individuals to take constructive actions regarding problems. They have fewer difficult problems than pessimists. It improves the ability of one to have more social support.12

Harvard researchers studied a group of healthy, intelligent, and socially gifted freshman from different economic backgrounds. Wealth and privilege were not as significant factors for later success and health. What then were the major factors for success and good health? Optimism and maturity! Reactive thinking that blames others and a refusal to acknowledge problems were not conducive to success. There was a large difference in health during middle-age. The pessimists in the study developed serious diseases by the age of 45.13

Some of you remember happy-go-lucky TV characters such as Maverick. Not all optimism improves health, only realistic optimism does. Possessing and insisting on unrealistic goals undermines the health. Unrealistic optimism includes the belief that one is much less likely to experience adversities than the average person and minimizes or completely ignores the risk for adversities. It also holds the exaggerated belief that one possesses the capacity to control all external events and people’s responses. This leads to an illusion of superiority and overassessment of one’s talents.14 Then too, premature optimism can hamper growth and strain relationships. In helping and encouraging depressed or hurt individuals, empathy, realistic goals, and strategies must come before optimism.

Cultivate gratitude. Gratitude has been linked to greater optimism, confidence, better social support, and less stress.15 In certain ways gratitude of the “littles” underlies many virtues and is foundational to life’s rewarding relationships. Think of ten things that you are grateful for each day. Begin the process as soon as you wake up. Glad for indoor plumbing? Happy that your kidneys and bladder work?

Cherish the lessons learned from past failures. Even when we achieve negative results, we can learn positive lessons. Thomas Edison failed hundreds of times before he successfully created the light bulb! Sometimes we need to fail before we light in an avenue of thought that completely transforms us. I personally like achievable goals with great results, but even when I have failed, I have usually learned a valuable lesson. Take a moment and think about a lesson you have learned from a personal failure. Did you become a better person because of that failure? Past mistakes can become stepping stones to real progress.

Shift your focus on what you can do. Disappointments and delays happen; we cannot control people or events. Many times the best approach is to focus on what you can achieve. I have two major work projects. One of them has been tied up in a committee for over one year. I sure would like to accomplish that project before I retire. That disappointing delay did initially cause me to become disgruntled and discouraged. When I recognized that I could shift my focus to my second work project, my attitude improved. I was able to achieve 90% of the annual sub-goals involved in the second project. Definite sub-goals and concrete steps give you a sense of progress as you accomplish them.

Cultivate a pro-active language. The words we express impact our minds rather negatively or positively. If you utter a reactive statement such as, “there is nothing I can do about it”, rephrase it so as to limit its negativity and make it pro-active. “There doesn’t seem to be anything I can do about the situation presently. I have to give this situation more study, get counsel, and maybe research some options. Or, perhaps I should refocus my time and energy to another venue. Cognitive distortions can obscure our perceptions of our opportunities and magnify our troubles. They fuel pessimism. Understand what cognitive thought patterns are and replace them with healthier ones. Check out the information at this link to learn about cognitive distortions and how to overcome them: Mental Strategies for Overcoming Anxiety.

Commander James Stockdale was held in Vietnamese POW camp with other American prisoners. Many of the captured men recurrently thought they would be released before certain holidays, but died of a broken heart when that never materialized. Stockdale admonished we will eventually get free but not on your time schedule. Stockdale believed you had to confront brutal facts and live the best you can in hard reality while at the same time never losing sight of your ultimate goal. What is better than optimism? Faith in a God who works all things for good and who can transform personal disasters into meaning that leads us to permanent success and victory. Love is a currency that never fails through the vicissitudes of life. For another powerful story, see Disguised or Kept in Reserve.