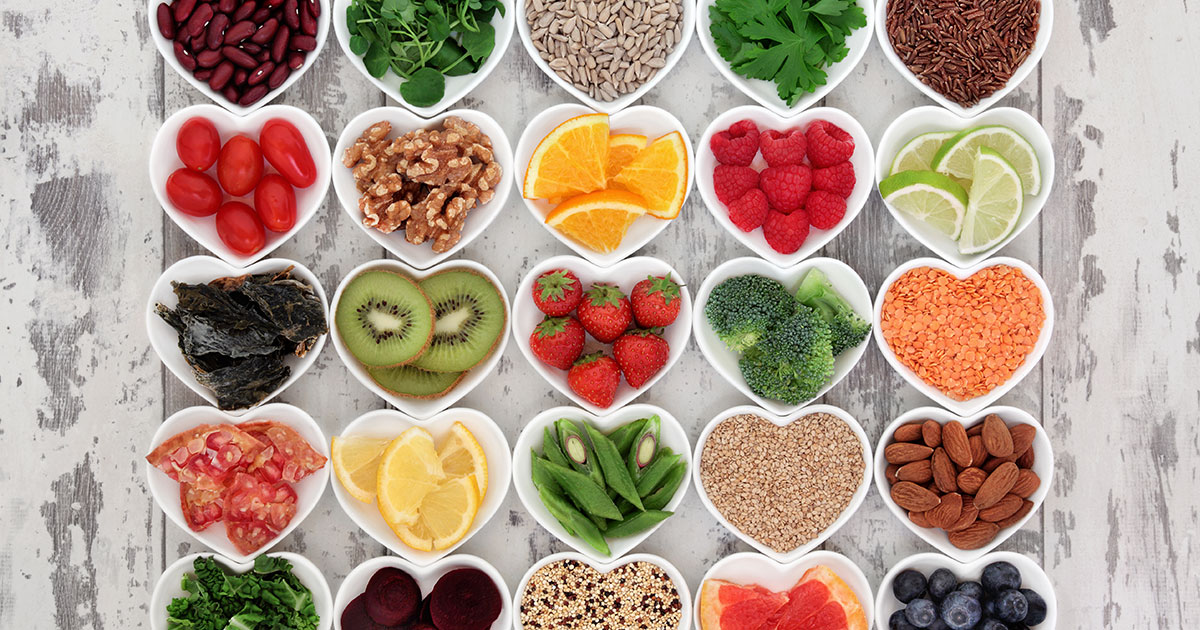 Another study showed that eating 3 daily portions of fruit and vegetables reduced one’s risk for cardiovascular mortality by 9%. Those who daily ate 5 to 7 portions of fruit and vegetables reduced their risk by 20%. However, those who consumed more than 7 portions a day reduced their risk of dying from cardiovascular disease by 31%.2 Vegetables have significantly higher health benefits than fruit. Plant foods have no cholesterol and generally little saturated fat. What is probably more important in cardiovascular health is that plant foods are rich in fiber, antioxidants, and anti-inflammatory compounds.

Analyses from 6 data banks regarding the total intake of insoluble fruit and vegetable fiber showed that the likelihood of a cardiovascular disease or coronary heart disease event steadily decreases with increasing intake of dietary fiber. 6 A significantly lower risk of both CVD and CHD was observed with every additional 7g of fiber per day consumed. 7g of fiber can be achieved through one portion of whole grains (found in bread, cereal, rice, pasta) plus a portion of beans / lentils or two to four servings of fruit and vegetables. 7 Not only does fiber reduce cholesterol levels, it also reduces inflammation. 8,9

People who survive heart attacks have a greater chance of living longer if they increase their dietary intake of fiber. Eating lots of cereal fiber is especially beneficial. Those who ate the most fiber had a 25% lower chance of dying in the nine years after their heart attack compared with those who ate the least fiber, the researchers found. Every 10g per day increase in fiber intake was associated with a 15% lower risk of dying over the nine-year follow-up period. 10 Unfortunately less than 5% of Americans consume the minimum recommended fiber intake of 25g per day for women and 38g per day for men. In the UK, adults are recommended to eat at least 18g of fiber daily but dietary surveys suggest people eat an average of only 14g. 11

Please note: The foundation of coronary artery disease often begins in childhood. Regular family meals around a table boost children’s fruit and vegetable intake. It makes it easier for them to reach the recommended five portions a day. Consuming 3 or 5 portions a day reduces it by 18%.12

Not only does eating fresh and frozen vegetables combat inflammation, it helps to reduce the risk for hypertension. Among commonly consumed individual raw vegetables, tomatoes, carrots, and scallions related significantly inversely to BP (blood pressure). In other words frequent consumption of raw tomatoes, carrots, and scallions was linked to less risk for hypertension. Among commonly eaten cooked vegetables, tomatoes, peas, celery, and scallions related significantly inversely to BP. 13 It is important to eat fresh or frozen veggies and canned vegetables. Canned vegetables are high in sodium and the packaged frozen vegetables in a sauce are usually high in sodium.

Check the Adequacy of Your Diet.

Deficiency in either folic acid or vitamin B12 can encourage atherosclerosis. Deficient or marginal intakes of magnesium, zinc, vitamins C, E, and A, B3 and B6 interfere with the body’s production of anti-inflammatory fighters. The body converts vitamin D into a potent anti-inflammatory hormone.

A 5-year study showed that a daily dose of vitamin D3 improves heart function in people with chronic heart failure. These 160 patients were already being treated for their heart failure using proven treatments including beta-blockers, ACE-inhibitors, and pacemakers. 15

Approximately 50% of the population in North American and Western Europe has either an insufficient or a deficient amount of active vitamin D in their bodies. You have a substantially higher risk of being deficient if you are elderly, have dark skin, live in the northern latitudes,  have obesity or kidney disease, or use sun screen. Vegans should take both vitamin D and vitamin B-12 supplements. We now know that we do not store up enough vitamin D to hold us through the winter months.