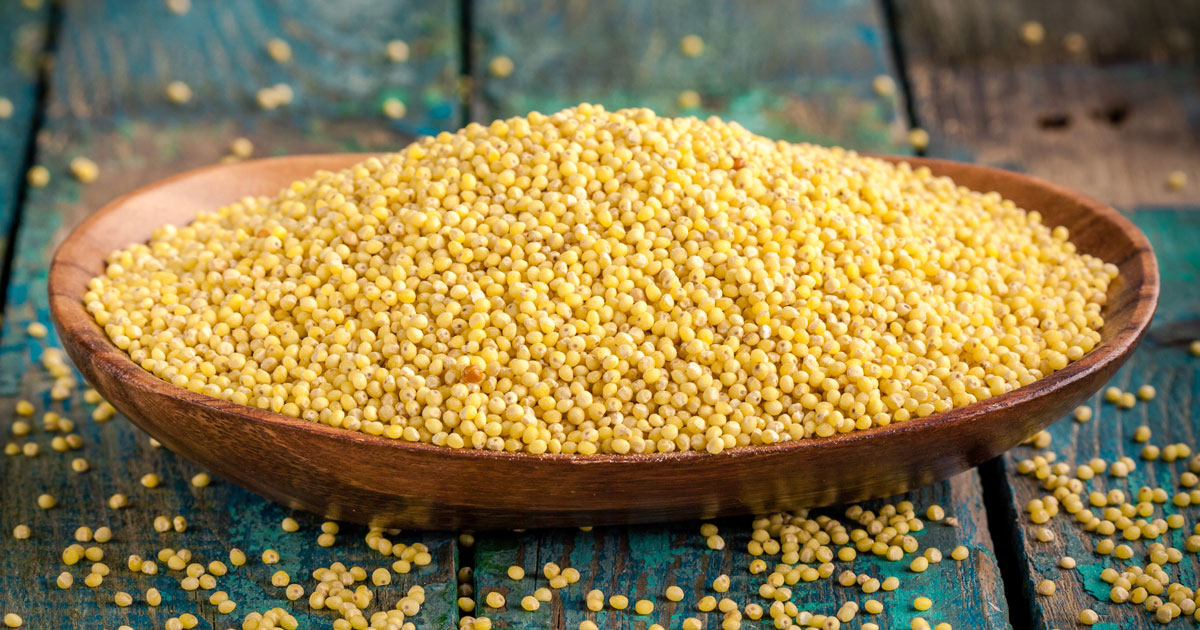 Want to try a delicious alkaline and gluten-free cereal for a change? Studies indicate that millet actually targets diabetes and inflammation. Providing a good amount of magnesium, phosphorus, protein, fiber, and anti-oxidants, this tasty cereal is certainly nutritious. The Hunzas, who are known for their excellent health and longevity, consume millet as a regular staple in their diet. Millet is also rich in a class of phytonutrients known as lignans. Bacteria in your intestine convert lignans into anti-cancer compounds. Millet, an important food crop in Asia and Africa, has health benefits just recently investigated.

How? For one thing, the magnesium in the millet improves the ability of the cells to respond to insulin. Insulin helps to control blood glucose levels. Secondly, millet has a relatively low glycemic index and has been shown to produce lower blood sugar levels than either wheat or rice.

However, there is more. Take this study, for example. To find out if millet could effectually help people with type 2 diabetes, researchers fed diabetic mice a high-fat diet which also contained Japanese millet protein concentrate for three weeks. When the three weeks concluded, they found that their HDL (good) cholesterol level was increased. Even more importantly, their adiponectin, a beneficial hormone that helps energy metabolism, was also increased.1 A similar study using Korean proso millet showed basically the same results as did for the Japanese millet.2 Proso millet is usually sold in the United States.

Adiponectin is a hormone produced from fat tissue. It regulates energy metabolism, helps the cells burn fat for energy, and improves cardiovascular health. Sufficient levels of adiponectin in the circulatory system plays an important role in protecting from insulin resistance, a key problem in type 2 diabetes. The term, insulin resistance, is used when insulin is not allowed to open the portals of the cells to allow glucose to enter. Glucose then accumulates in the blood causing it to rise into the abnormal range.3

Unfortunately, serum levels of adiponectin are reduced in individuals who are obese, have high blood pressure, metabolic syndrome, or type 2 diabetes.4 Those with severe coronary artery disease and abdominal obesity have decreased plasma adiponectin.5 In such cases, levels return to normal when the caloric intake is decreased.6

Millet offers even more benefits for diabetic individuals. Several epidemiological studies have shown that the consumption of finger millet (the type grown in India) alleviates diabetes-related complications.7 A controlled laboratory study showed that when rodents were fed high fat diets that include millet, especially when combined with bran, they had reduced free radical damage, inflammation, blood fats, and improved the concentration of friendly bacteria in the gut8—all of which means less diabetic complications.

Adiponectin also helps to protect blood vessels from inflammation. High levels of adiponectin are associated with reduced risk of heart attacks. Adiponectin helps keep the blood vessels open, improves blood flow, and reduces the risk of undesirable clots.9 Both elevated triglycerides (blood fats) and C-reactive protein levels (a marker for inflammation) levels increase the risk for heart disease and stroke. In one study rats that had elevated triglycerides were fed millet for five weeks. Their triglyceride and C-reactive protein decreased significantly.10

Inflammation is not only common in acute sickness, but also fuels chronic disease. Japanese scientists used mice to analyze the effects of millet bran extracts on the production of cytokines, substances that are involved in the cell-to-cell communication in immune responses. Results showed that all extracts of several types of millet, including the one that is used mostly in the United States, showed suppressive activities against the production of inflammatory cytokines. What was even better is that the compounds in millet worked selectively. The millet bran extract did not suppress the activities of the anti-inflammatory cytokines. Even if we do not use the laboratory prepared extracts, regular consumption of millet may help to curtail inflammation that is commonly seen in obesity, prediabetes, diabetes, and other chronic diseases.11

Some whole grains do not cook very easily. For example, wheat berries, which are the entire kernel of wheat, do not open up and become fluffy and easy to chew. Even after simmering for several hours they still are very chewy and need to be masticated for a long time to break down the fiber. The same is true for rye and whole oats. However, millet cooks quickly and is very palatable, soft, and has a nice flavor.

The proportions for cooking whole grain millet are as follows: add one cup of millet to three or four cups of water with 1/8 to 1/4 teaspoon of salt. Bring to a boil, cover, and simmer for 45 minutes to an hour, or until the water is all absorbed. Do not stir while cooking. Thickened blueberries or dried fruits or can be added during the last 10 minutes of cooking. Just place them on top of the cooking millet and they will soften, don’t stir them in. Or, it can be served as part of a main meal as rice would be used, in casseroles and other dishes. Try it and gain the benefits of this very nutritious golden grain.